Adam Buxton runs around The States like a March Hare.

I began an entry for March in my general Adam and Joe blog but there were so many lovely things about Adam's first 2014 trip to the States that it made the post look lumpy. I'm putting it all here and so that it can be contained in one tidy link on the other blog. 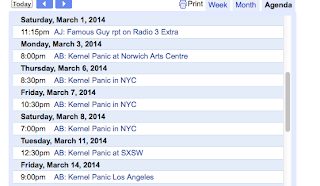 In preparation for the L.A. leg of his visit he wrote a letter to Marc Maron and exposed it to the intervwebs.

These are just a few more of the excited tweets..... 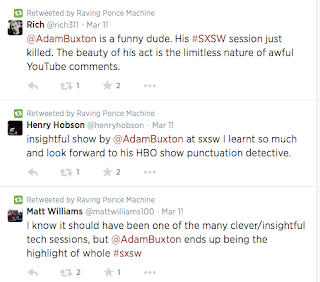 
Cant remember laughing that much in a very very long time! big up @AdamBuxton thanks for coming to our neighborhood pic.twitter.com/E5LVAYU9Jk
— DOORLY (@doorlydj) March 15, 2014


Here's me shamefully gushing about how amazing @AdamBuxton is right in his face! Thanks for an amazing night Buckles! pic.twitter.com/BnJnzXoMJV
— Jeffboy (@Jeffboy) March 15, 2014


I can't ignore the fact that he had a wicked meetup with ancient chums (stolen from his blog).

Posted by Auntie_Nubbins at 12:26 No comments: